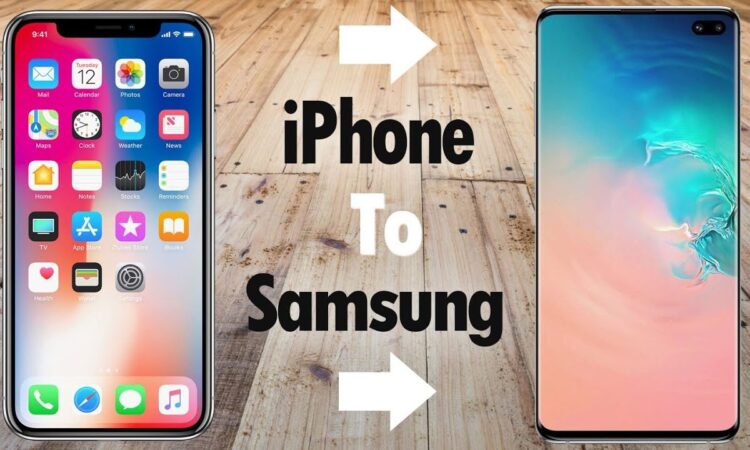 This article shows you how to switch from a Samsung phone to an iPhone without losing data. Even though there are many ways to switch smartphone platforms, we won’t list them all here because some require too many steps or too much time. Instead, follow these tips.

Has Switching from Samsung to the iPhone been a challenge?

Following the completion of the backup, perform the following steps:

Use the Move to iOS command.

When you switch from a Samsung phone to an iPhone, the free Move to iOS app for Android from Apple does most of the work for you. Move to iOS is an app you can get from Google Play and put on your Samsung phone. It looks through your Samsung for important information like contacts, photos, texts, calendars, web browser bookmarks, and email accounts and then gets ready to move them to your iPhone. When you connect the two phones wirelessly, all of the data from Samsung will move to the right apps on your iPhone.

Move to iOS should move your photos, but you may want to move them separately if you have a lot of photos or don’t want to use Apple’s Photos app. Check out How to Move Photos From iPhone to Android (the instructions work in both directions), or move your photos to your computer and then sync them to your new iPhone.

Apps can’t be moved with Move to iOS because they wouldn’t work. Many apps are available for both the iPhone and the Android. Open the App Store app on your iPhone, look for the apps you need, and then download them. If an Android app doesn’t have a version for the iPhone, there’s probably a similar one.

If you have an account in an app, you should be able to use the same account on the iPhone. Depending on the app, you may be unable to move in-app purchases from your Samsung to your iPhone. Contact the app’s developer if the purchases don’t move over.

If you use Spotify, Itunes, or another streaming service, it’s pretty easy to move your music when you switch. Get the app for your iPhone, login, and your music library will show up. You’ll have to download songs again to listen to them offline. If you’ve ripped music to your computer, you can put it in iTunes (or Music, if you have a Mac) and sync it to your iPhone.

Move the movies and television.

It’s hard to move movies or TV episodes you’ve bought on your Samsung, just like it’s hard to move podcasts. You’ll be fine if the service you bought the movie or episode has an iPhone app. Install the app, sign in with your account information, and your purchases will be ready to use. You won’t be able to move the content to your iPhone if there isn’t an app for it or if the movie or episode uses DRM that the iPhone doesn’t support.

It’s easy to move eBooks as long as the service you bought them from has an iPhone app (and there probably is). Install the iPhone app, sign into your account, and download the books you bought from Amazon’s Kindle app, Google Books, Kobo, or elsewhere. You may also be able to sync the books from your computer directly to an app like Apple Books, depending on the file type.

How do I get my Samsung contacts onto my iPhone?

You don’t want to move all of the data from your Samsung, but you want to make sure your contacts are moved. That’s not hard at all. Switching to iOS is a good idea, but it’s not your only choice.

How can I move info from my iPhone to my Android device?

With an app like My Contacts Backup, you can move your iPhone contacts to Android when you switch from iPhone. Use Google Drive for your calendar, email contacts, and everything else. Most iPhone apps are also available for Android, so you may be able to get to the data saved in the cloud by each app.

How do I get music from my iPhone onto my Android?

Get the Apple Music app for Android and use your Apple ID to sign in. You can also move your music to another service, like Spotify or Amazon Music.

How do I move photos from my iPhone to my Android device?

Use the Google Photos app for iOS to back up your photos. Sign in with your Gmail account and tap “Back up and sync.” Then, download Google Photos on your Android device and sign in to see your pictures.

Which phone is better, an iPhone or a Samsung?

Compared to iPhones, the newest Samsung devices have better screens, more storage space, and a more flexible interface. On the other hand, iPhones usually run faster and have better safety features. If you already have a Mac, an iPad, or an Apple Watch, an iPhone will work better with them.