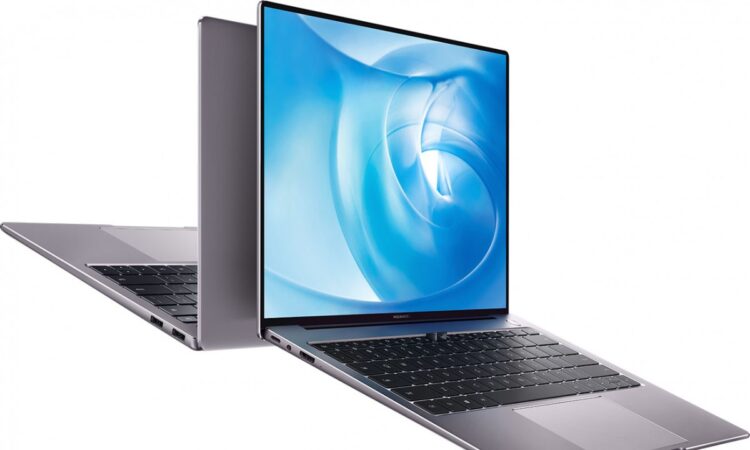 If you say Matebook Pro, you might mistake this laptop for another well-known brand. The Matebook X Pro may look like an Apple product, but it is not. It’s a simple design that looks and feels rich and modern. The latest Matebook X Pro model has a 3K resolution screen that goes all the way to the edges and an impressive touchscreen that lets you swipe to do things.

The Matebook Pro X from Huawei is both light and full of features. It has checked off a lot of important boxes. This laptop is easy to take with you anywhere because it only weighs 1.33kg. It also seems strong. I wouldn’t drop it on purpose, but it seems like it could take a beating and still work.

The metal finish outside the case makes it smooth to the touch, and it’s quite thin, at about 14.6mm. But being skinny has downsides (in laptop land, at least). There are only two USB-C ports, one USB port, and an audio port on the Huawei Matebook Pro X.

The Matebook X Pro is powered by an Intel Core i7, 1165G7 processor from the 11th generation. This chip is powerful enough to handle hard tasks, like editing HD video in Premiere Pro or filling up Google Chrome with 20 tabs at once. It will make it through.

The show has a 3:2 aspect ratio called a “FullView Touch Display.” This means that instead of the usual 16:9, it shows things in a vertical format. It might not be the best for watching movies, but the screen size is great for writing and viewing websites.

On some laptops, the main power brick is further up the cord, but on this one, it is right next to the power plug. You might need a little more space on your power board if you have other appliances and devices plugged in at the same place. The Matebook X Pro has a fingerprint scanner built into the power button.

In terms of power, a fully charged Huawei Matebook X Pro should last about 10 hours. That includes watching Netflix for 10 hours straight. This isn’t a long battery life, but it’s enough to get you through the workday. But if you need more power, it will take about an hour and a half to charge the Matebook fully.

The touchscreen on the Matebook Pro X has built-in gestures, including a quick way to take a screenshot. You can open the screenshot app with a three-finger swipe down the screen. You can pick which portion of the cover you want to capture. Some features make it easy to sync your phone to the device, such as mirroring your phone’s screen. But you won’t be able to use this unless you have a Huawei device.

The fingerprint scanner is made into the power switch. You’ll fix it up the initial time you turn on the laptop. It’s a good security feature, but it takes longer to boot up than other devices with the same features. The Matebook X Pro has two built-in microphones, making any online meeting very clear for everyone. The camera’s quality matters, not the sound, which brings us to the Matebook X Pro’s biggest flaw.

I thought, It’s too bad there’s no camera on display, but then I saw it. On the top center of the keyboard, there is a button with a camera icon. When the button is pressed, the camera pops up from the keyboard. I first thought, How cool! But when I opened the webcam application, I saw that setting the camera up was a huge problem.

It’s awkwardly placed, which is a shame. If you want to hide a double chin, this camera won’t help you. The camera on the Matebook X Pro is new and different, but it is in an awkward place. The camera looks up from under your chin and is built into the keyboard.

Even though the camera angle isn’t ideal, the image is still clear, and if the laptop is set up high enough, you should be able to overlook the awkward placement of the camera. Other modern laptops have sliders that move across the lens to block anyone from looking in who shouldn’t. The idea of a key that pops up is great, but it’s not very useful when sitting at a desk.

The best thing about the Matebook X Pro is how it looks. Compared to other laptops that cost about the same as Huawei’s, they almost always look superior. It looks great. There’s no doubt about that. There are two colors to pick from Dark Grey and Emerald Green. Overall, the Huawei Matebook X Pro is a stylish laptop at a high price. Its look and feel are its best features, but its awkward camera placement and limited device support are a bit of a letdown.