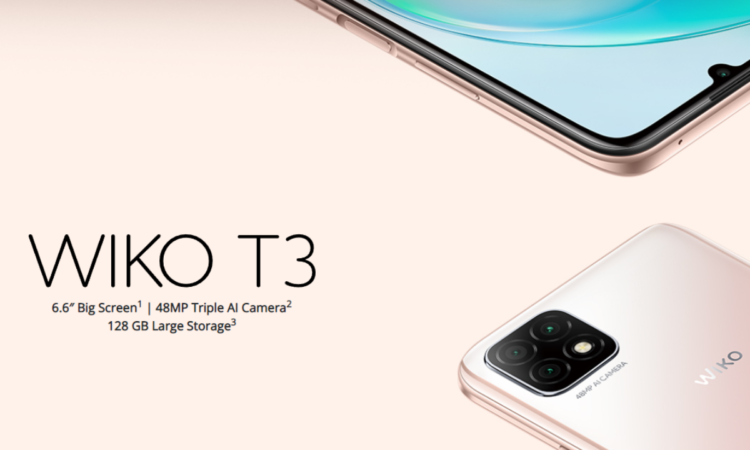 The French brand Wiko will soon launch in the Philippines. Its official Shopee Mall PH page is now up and includes three gadgets, which may be the first ones they will offer locally. Today, we will examine one of them, the Wiko T3.

The Wiko T3 has a huge 6.6-inch display with an HD+ pixel quality, suggesting that it is a well-equipped intermediate smartphone. The brand also brags about its big, 86dB-capable speakers.

This device is powered by a 2.3GHz MediaTek Helio P35 octa-core CPU. IMG GE8320 GPU handles graphics, 4GB of RAM allows for multitasking, and 128GB of storage is scalable to 256GB via microSD card.

On the rear, a square piece of glass houses the 48-megapixel primary camera, 5-megapixel ultra-wide camera, 2-megapixel sensor, and LED flash in a 22 configuration.

The included charging adaptor was not specified. However, the normal 5,000mAh battery was included.

In contrast to other manufacturers, it will launch with the Android 11 operating system and no additional skin or user interface.

According to a few Facebook Marketplace postings from mall dealers, the Wiko T3 is expected to sell for 175 USD to 200 USD.

The Wiko T3’s back has a triple camera with 48-megapixel, 5-megapixel, and 2-megapixel resolutions. It has panoramic, HDR, and LED flash capabilities.

Taking selfies and recording self-recorded videos is possible with the device’s single, 8-megapixel camera. There are several connectivity options on the phone, including Bluetooth 5.0, WiFi 802.11 b/g/n, WLAN, GPS with A-GPS, GLONASS, GALILEO, BDS, FM radio, and USB. A fingerprint sensor, accelerometer, and proximity sensor are mounted on the side of the device.

A large 6.6-inch HD+ IPS display is one feature of the T3’s advertisements; it is positioned front and center. This display size is currently extremely prevalent, and for a good reason. It is ideal for seeing material and watching videos without straining your eyes. With HD resolution, objects should seem quite clear.

Device to give a performance

This gadget is powered by the MediaTek Helio P35 chipset used in several other handsets. Due to this, it is a tried-and-true processor capable of handling daily work adequately, supplemented with 4GB of RAM for multitasking and 128GB of extendable internal storage via a microSD card.

Other significant features include a triple-camera configuration with a 48-megapixel primary sensor, a 5-megapixel ultrawide sensor, and a 2-megapixel depth sensor. The experience of social media snapshots on smartphones has also been largely positive – particularly when the software is improved.

The side-mounted fingerprint scanner is a breath of fresh air here. Say what you will about in-display variants, but side-mounted variants are often more ergonomic and dependable in various settings. The lights are powered by a 5,000 mAh battery that can be recharged by wired 10W charging.

While the Wiko T3 is now listed on Lazada for $175, many believe that this is placeholder pricing. Based on foreign and third-party shop pricing, the suggested retail price should be about 175 USD, with a release promotion dropping the price to 175 USD. At that price, it competes with smartphones such as the realme C35 and the Redmi Note 11 – both outstanding handsets. As consumers with an abundance of options, we could not be happier.