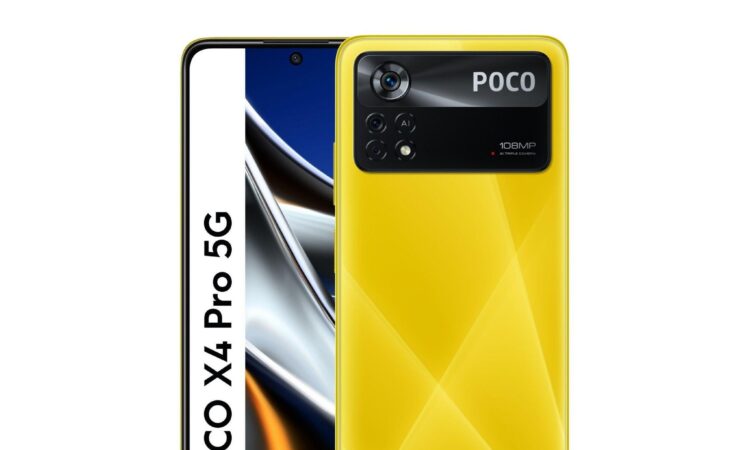 The middle range of smartphones is crowded and doesn’t seem to be getting any less so. Whether you’re talking about the US market or the world market as a whole, there are a lot of new and interesting handsets. POCO, a subbrand of Xiaomi, is one of those brands that keep making new models with interesting designs and packaging.

The X4 Pro 5G costs as little as USD 330 and comes with a pretty good set of hardware. The POCOX4 Pro 5G has several “important” features that meet the needs of a lot of consumers. That means it has a big screen, a large battery that charges quickly, 5G support, and more than one camera.

Its specs put it squarely in the middle of the smartphone pack, but its price is much lower than that of most other phones. I’ve used one of these and a few other models for a few weeks and have some feedback and thoughts to share.

With its thin bezels, flat edges, reflective finish, and thin profile, the X4 Pro 5G looks like a more expensive premium phone. Even though it’s made of plastic and has an aluminum frame, it looks better than it sounds on paper. Light moves across the back to make it stand out, especially when the sun is out.

It feels great in your hand. Most phones are rounded and tapered, but this one feels more crisp and straight. It’s a nice change from the models I’ve been using for the past few years. My review unit is black but looks more grey and steel than black. It comes in three colors. The effect of refraction reminds me of bright lights shining in the night sky.

I can’t say anything about the other colors, but this one is easy to get dirty but easy to clean. The IP53 rating keeps dust and water out, but it’s not completely waterproof. You might be okay if you get caught in a sprinkle or splash, but to be safe, you should keep it away from pools. The POCO X4 Pro 5G has its take on the multi-camera array, just like every other phone.

Here, the module takes up about a quarter of the space at the top. The main camera has 108 megapixels, the ultra-wide camera has 8 megapixels, and the macro camera has 2 megapixels. The brightness and refresh rate of the 6.67-inch screen, which is 120Hz, make it look amazing. The 20:9 aspect ratio and 1080 x 2400 pixel resolution make it easy to read and watch videos.

The fingerprint reader on the side is also the power button. The more phone makers do this, the more I like it. Even though I can set my devices to wake up when I pick them up or tap them, I tend to press the power button more. The POCO X4 Pro 5G has a 3.5mm headphone jack was a pleasant surprise. I like that one of these will still be around in 2022 and will be on top.

The X4 Pro 5G is powerful because it has a Qualcomm Snapdragon 695 5G processor, at least 6GB of RAM, and 128GB of storage. There is also an 8GB/256GB version if you want to step things up. These are middle-of-the-road specs for phones today, but they’re way more than what most people need.

If you’re considering getting this model, I’d recommend getting the 8GB/256GB version for extra peace of mind and durability. With normal use, the 5,000mAh battery will last about two days. If you charge your devices while you sleep, the battery will rarely go down to the yellow or red levels. The POCO X4 Pro 5G can be charged quickly with up to 67W, but it can’t be charged wirelessly.

This didn’t bother me much because I’m used to plugging in once a day and topping up in the car now and then. As far as I know, my review unit came with the 67W brick, but it doesn’t work with US outlets. I’ve found that a half-hour on the charger is all it takes to get the battery from almost dead to about 75% full. I can’t see myself needing to be plugged in for more than the time it takes to get to and from work.

The POCO X4 Pro 5G is an impressive little package living up to my hopes. I’m not a user who pushes phones to their limits; I don’t play high-end or graphic-intensive games. So, with that in my brain, I’ll say that the titles I dabble in did fine. Most of the time, a new device with this much hardware doesn’t have speed problems or lag, at least in the first few weeks.

Over time, I added new apps and games, slowly adding accounts and increasing the number of requirements. I haven’t viewed anything yet that proves a weak spot in general performance. The battery life has been great; it usually lasts me two days. I’ve gotten used to not charging my phone at night, and the X4 Pro 5G hasn’t made me change that habit.

I can plug in a while having coffee or brunch and feel confident that the rest of the day will go well. This place doesn’t have wireless charging, but that’s not a problem for me. I have a few wireless chargers, voltage regulators, and docks, but I don’t use them very often. I’m happy to give up wireless charging in exchange for charging that is very fast.

At 67W, the battery charges more than 50% in just 15 minutes. The main camera has 108 megapixels, joined by an 8-megapixel ultra-wide-angle (118-degree) camera and a 2-megapixel macro camera. The main camera uses pixel binning, so it’s more or less a 12-megapixel camera.

The main camera took pictures with a good balance of light and detail. The colors are true, and most of the time, you don’t need to do any editing before posting to social media. Low-light situations can be hard for the phone, and night photos are hit-or-miss. I don’t take many pictures after sunset, but the POCO X4 Pro 5G might not be the best choice if I did.

The super duper and macro lenses work, but I have higher standards than my family and friends. Some photos would make me frown, but I had friends who would post them online without a problem. I’ve seen much worse on social media, but the camera experience is average. Don’t buy the POCO X4 Pro 5G just because it has a camera with 108 megapixels.

Given that the 6GB/128GB model costs $330, I have no problem recommending the phone to consumers. It has everything I need in a device and probably everything the average user needs, too. It just so happens that it costs less than the other options. Even though the Pixel line seems to have completely removed the headphone jack, I’m glad to see it here.

I want the power button to be on the side with NFC, an IR blaster, and a fingerprint reader. With its fully customizable user interface (UI), the POCO X4 Pro 5G feels like something new and welcome. I wish the camera system were a little better, but I’ll admit I’m being slightly harsh.

Most users might not have a problem with what’s going on. Also, since the phone can be used anywhere in the world and is unlocked, the 5G support may not be the same as what you get from US carriers. You should be fine if you are happy with 4G LTE or spend most of your time on Wi-Fi.

Lastly, you might want to get a new charger that can handle up to 67W, even though the one that comes with the phone doesn’t work with US power outlets. I’m increasingly interested in US phone companies that aren’t as well known, and I’m open to alternatives to the bigger names. Some of POCO’s models have interested me so far, and I’m looking forward to seeing more.