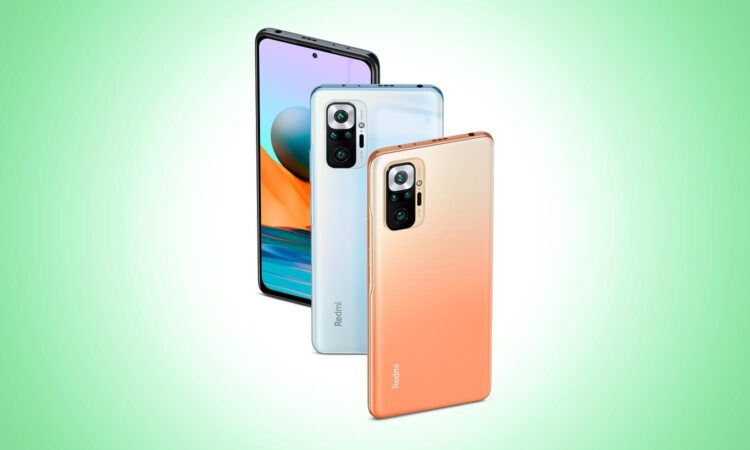 Ouch, Xiaomi, ouch. Aside from a few jabs at the problems of the competition, the Redmi Note 10 Pro is a little hard to understand. It’s not a cheap version of the Xiaomi Mi Note 10, but it does have the same 108MP camera as the £459 phone.

The main difference is that Redmi is the entry-level phone, and Mi is the flagship phone. I don’t know why Xiaomi kept the rest of the name the same. It doesn’t matter much. Both phones are great, but the Redmi Note 10 Pro is one of the best you can get in the sub-£300 price range, which is getting more and more crowded.

The Xiaomi Redmi Note 10 Pro begins at £249 in the United Kingdom. Expanding the storage to 128GB will cost you an extra £20, bringing the total to £269. That puts it up against some good phones, like the Google Pixel 4a, which costs £350 and is the best in its price range.

In terms of how it looks, the Xiaomi Redmi Note 10 Pro gets off to a good start. The 6.56-inch screen takes up most of the front, and a thin bezel goes all the way around. Even though the bottom edge is a little bit wider, it’s hardly noticeable and doesn’t look like a “chin” like many cheap phones. There is no notch, either. Instead, a pinhole camera sit down in the center of the Display, millimeters from the top edge.

When you turn it over, it looks just as much like a flagship as the newest, most expensive phone from Samsung or Apple. It looks like it should be more expensive with a back panel that softly curves to the sides and a glass back. The camera array looks just as complicated, with a fancy silver border around the 108MP number that makes it look a bit like the Instagram logo in a different color.

Xiaomi keeps the sides of the phone simple by only having a volume rocker and a power button that is also a fingerprint reader. The top has a headphone jack, and the bottom has a USB-C charging port. The phone can also use two SIM cards and a microSD card simultaneously. That’s good because some phones won’t let you add more storage or a second SIM card, and others will make you choose between the two.

On paper, the Xiaomi Redmi Note 10 Pro’s screen pushes the mid-range definition. The 6.56-inch screen uses AMOLED technology, while most phones in this price range use cheaper IPS. It has a clock speed of 120Hz, which makes it easier to use and, in theory, lets games run at 120fps.

The resolution is 2,400 x 1,080, which gives you about 395 pixels per inch. This is much better than what you’d get on a typical laptop screen, though it’s not as good as the 2K panels on some high-end smartphones. More importantly, it is one of the best screens we’ve ever seen, regardless of price.

Our colorimeter found that 95.4% of the sRGB gamut was covered, with a volume of 97.2% and an average Delta E of 1.04. The contrast can’t be beaten because it’s an OLED panel, and while 430cd/m2 isn’t the brightest screen, it’s more than enough for all but the sunniest days.

The 120Hz refresh rate does turn off by default to save battery, but it can be turned on in the phone’s display settings. The faster refresh rate is nice but not too noticeable. Menus and app transitions feel much smoother, and it’s more fun to use, even if this is something you’re more likely to notice when it’s not there.

We haven’t been able to trial this as we normally do on performance. Our usual testing apps, GeekBench and GFXBench, don’t work, which is often the case before phones, so we can’t get comparable numbers. The Xiaomi Poco X3 NFC has the same core specs as the Xiaomi Poco X3, so we can assume that its performance will be very similar.

As you can see, everything is pretty much the same at this price point. However, the Google Pixel 4a, our favorite mid-range phone, falls slightly behind in multi-core performance. It’s probably not a difference you’d notice in everyday life, but it’s worth pointing out because it costs £50 over the Moto G 5G Plus and £100 more than the Moto G9 Plus.

The Poco X3 NFC, which sells for £200 and sometimes goes even cheaper in flash sales, is the show’s real star. The GFXBench charts show the same thing in which our Poco X3 NFC stands in for the Redmi Note 10 Pro. Here, it would help if you focused on the yellow lines.

Since the red lines have different resolutions, comparing them might not be a good idea. Here, the Moto G 5G is a clear winner. It’s not included because the tests failed again, but it’s similar to the £299 Realme X50 5G on the inside. Even though it’s not by a huge amount, all phones perform better in 3D than the Pixel 4a.

Besides its high-end screen, the Xiaomi Redmi Note 10 Pro also stands out because of its many cameras. You don’t see 108MP cameras very often at this price, which are rare in general. For comparison, we’ve seen high megapixel gets counted in the Samsung Galaxy S20 Ultra, S21 Ultra, and Note 20 Ultra, all of which cost more than £1,000 when they came out, as well as in Xiaomi’s own £459 Mi Note 10.

It was pretty good. Before sending me the Redmi Note 10 Pro, our editor for mobile technology, Nathan Spendelow, took some shots of the S21 Ultra from his balcony to compare with the Redmi Note 10 Pro. But if each picture is 16MB or more, do you have to use the full 108MP resolution? Here is a picture taken with the default 4:3 12MP setting. As you can see, the picture quality is still very good when there is a lot of light.

I can’t think of any major problems with the Xiaomi Redmi Note 10 Pro, except if you don’t like the company’s MIUI Android skin, which looks like a cartoon. Yes, we don’t know the UK price yet, but if it’s under £300, which it should be since the US RRP is $279, it’s a great choice with good performance, a great screen, and great camera skills.